Let's find out about WeakMap

Years have passed since ES2015 came out in June 2015. While writing the previous weekly picks, I thought, "Is there any ES2015 syntax I'm not using, like Proxy or Reflect? 🤔". The first things that came to mind were WeakMap and WeakSet. I became interested in weak references, so I translated the related content in the last weekly pick (link). My interest on the topic grew stronger, so this time I'm writing about WeakMap.

A WeakMap object is a collection of key/value pairs in which keys are weakly referenced. The keys must be objects. A primitive value cannot be a key. If you add a primitive value as a key, you will get an error Uncaught TypeError: Invalid value used as weak map key.

WeakMap provides a method for checking whether there is a value for a specific key, but it does not provide a way to enumerate the objects held as keys. And as is well known, objects used as keys in WeakMap are subject to garbage collection. If a reference to an object in the program does not exist except WeakMap, the object is garbage collected.

Let's say we have a function that returns a long array using closure, like this:

I checked the memory allocation status with DevTools.

Now, if we run the same code after replacing the collection object with new WeakMap() instead of new Map(), we can see that the memory is deallocated as follows. (Actually, I've only heard of it and it's the first time I've checked it like this, so I was amazed. 👀 )

If you are unfamiliar with this snapshot because you're not familiar with DevTools, I recommend you watch the "Gentle Walkthrough of Chrome DevTools (link)" or read the Chrome documentation (link).

Returns the value mapped to key, or undefined if there is no mapped value.

Returns a boolean value that asserts whether a value mapped to key in the WeakMap instance object exists or not.

Now that the brief introduction of WeakMap is over, let's look at an example of how to use it. Generally, it is used for code that is prone to memory leaks.

WeakMap facilitates memoization. Memoization is a technique to cache the result of expensive calculations and return the cached result when the same input value is received.

If memo is created with Map, the memory allocation status checked with the DevTools is as follows. 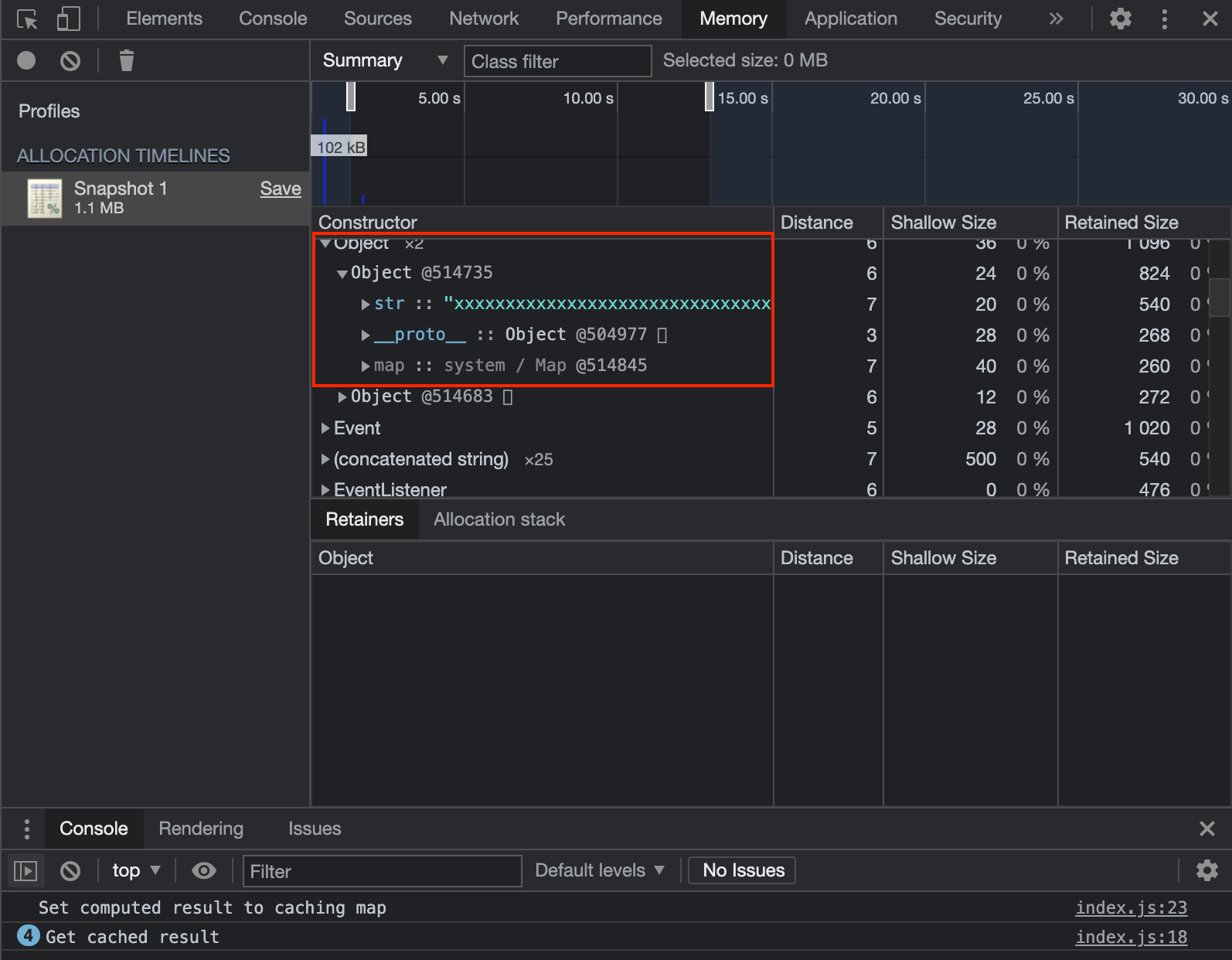 Now, if we change the cache object from Map to WeakMap, we can see that the object remaining on the figure above has been removed and the blue gauge went down slightly in the upper bar chart as the memory was deallocated. 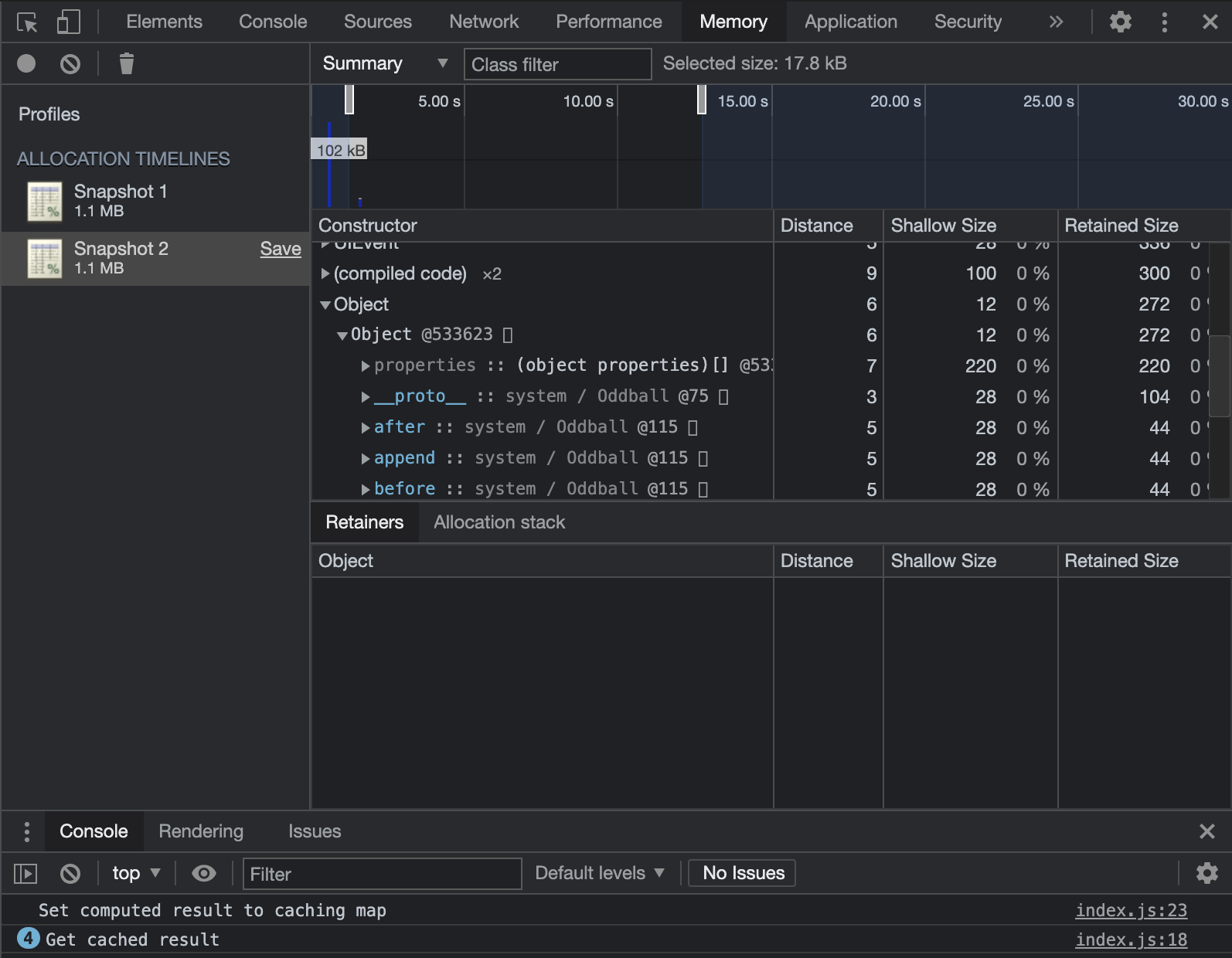 In simple vanilla projects, you will often need a custom event object. There is a way to mix-in an event object to the instance like code snippet of TOAST UI. However, if you simply implment the event object as a singleton, WeakMap can help prevent memory leaks.

The following code registers an event handler with targetObject as a key and executes it.

When the code below is executed, the memory of the user and handlers objects is collected by the garbage collector because user is registered as a key in WeakMap.

The figure below shows the situation in which user and handlers are not collected when EventEmitter is implemented with Map. 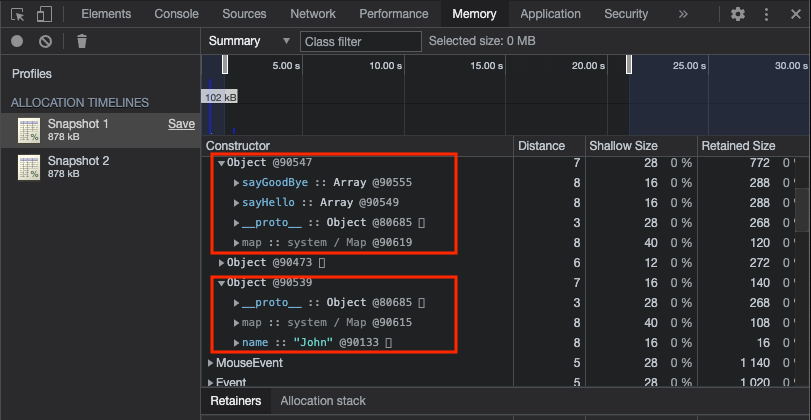 If we use WeakMap, we can see that the objects have been collected by the garbage collector. 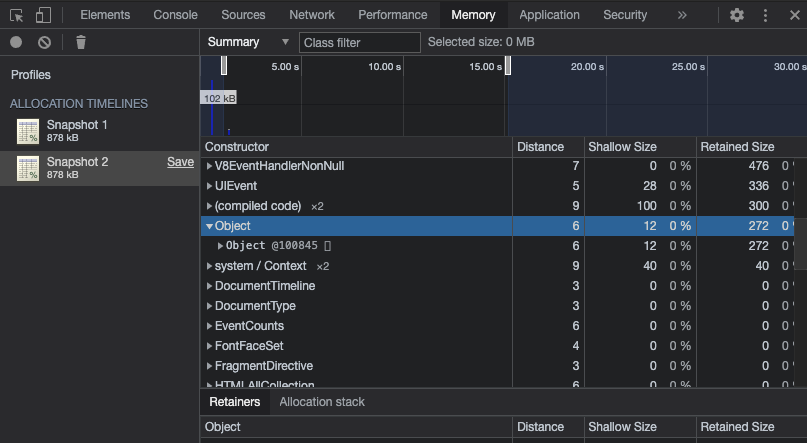 This can be easily found in Babel's transpiling results. The following code specifies the access modifier with the # keyword.

The following shows the actual result after transpiling. You can test this code in Babel's Try it out (link).

The reason for using WeakMap for private fields is as follows.

For more details, refer to the link.

In conclusion, WeakMap is a data structure that has an advantage in memory leak management by keeping weak references, although it does not support enumeration methods like Map.

While writing this weekly pick, I intentionally wrote complicated code to show an example of a situation where memory is not reclaimed, but this was to show when the garbage collector can and cannot reclaim memory.

In addition to being used for Vue 3 reactivity, WeakMap was used in an example of how to use _.memoize in lodash, which shows that it is possible to change a cache object to WeakMap. It is also used to polyfill private access modifiers for information hiding. Since IE11 is included in the browser support scope (reference), I think it can be usefully used at the framework or library level.

In fact, most projects these days are implemented based on frameworks, so you won't use it often in general situations. But if you need a data structure that has an object in the project as an identifier, you might want to consider using WeakMap before using regular objects or Map right away.